Back to all works 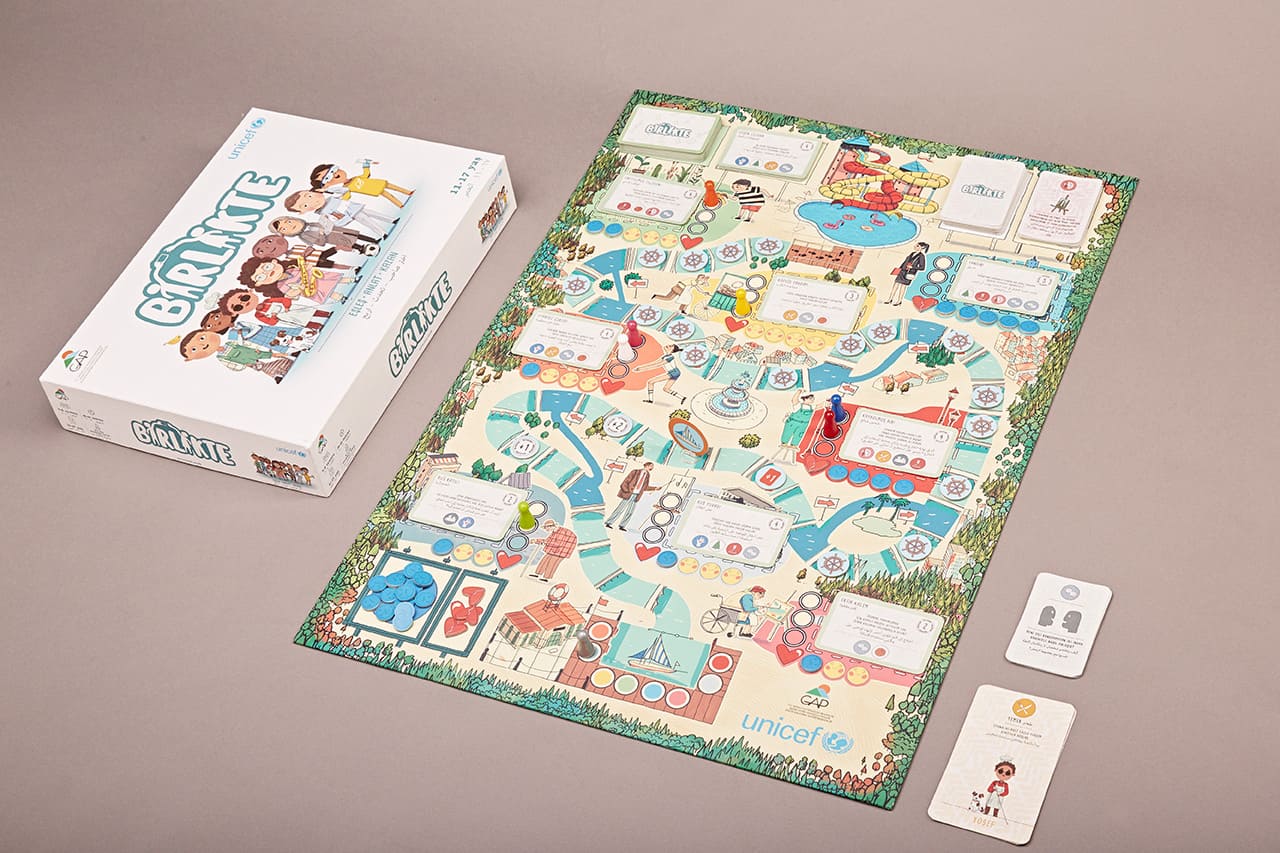 Be a group, tell together, win together! 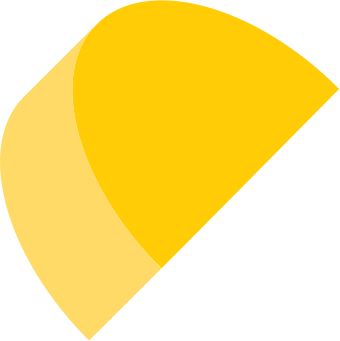 We know  that with growing instability in the Syrian region, increasing numbers of the Syrians are arriving as refugees and immigrants to neighboring countries and Europe. The situation brings with it much human suffering in the form of job and livelihood loss, severance of ties with loved ones, and the difficulties associated with habituating to a new locale. As ROOT, we sought[1]  to address the last of these challenges and offer a game to those affected by displacement. Admittedly, our solution targeted children who may be the most impacted by the tumultuous conditions and aimed to recover a sense of ease, play, social connection, and learning.

Early childhood experiences shape our perspectives and guide our downstream enjoyment and decisions. Therefore improving children’s  experience in the sensitive times of transition is not only a solution to a today problem but also to the future problems of segregation, alienation and discrimination. 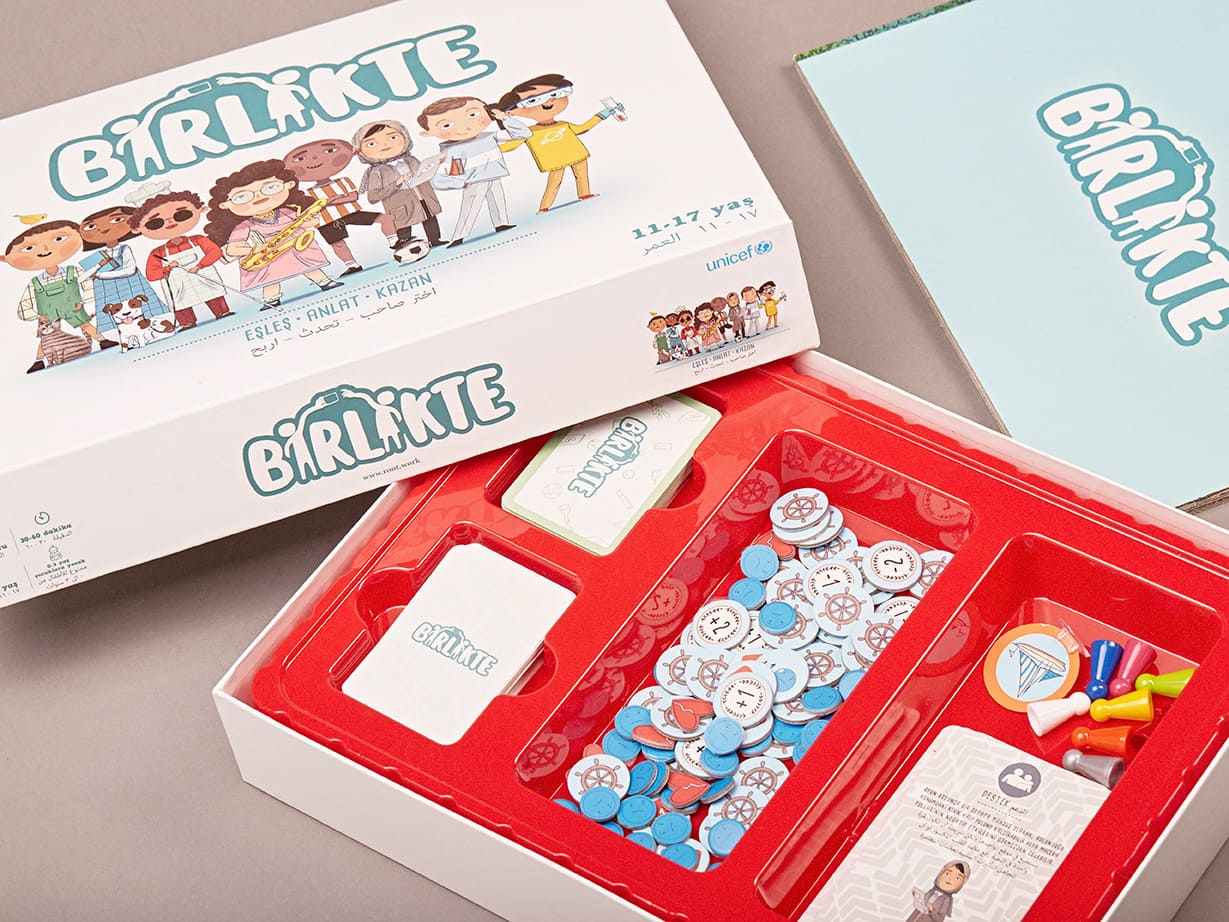 Initially, the board game was designed with cultural relics and artifacts from Syria and Turkey in a naive attempt to capture the journey from one location to the next. Given the ongoing destruction in the region of the world that the kids and their families were leaving behind, it later became clear to us that a reference to such items of dubious future presence could at times painful reminders.The game’s content needed to be reimagined accordingly to remove preserved or internationally recognized sites and objects, and instead include traditions of ,for lack of a better word, non-sedentary culture embodied in elements such as food, music, games, dances, animals, kinship ties, and language.

The game was composed of the visual elements outlined above and also included written text elements that conveyed the game mechanics, and the game prompts. All the texts were conveyed in Turkish and Arabic to match the languages of both the audiences, and the game prompts were intended to be less didactic and more evocative, seeking to elicit interactions between the children playing the game. In addition to keeping players engaged by invoking animations, impersonations, and sharing of personal narratives, we also provided information pieces to educate players about their human rights and values, such as one’s sovereignty over his or her  body, as well as international or national organizations to which one can submit complaints or notices of violation. 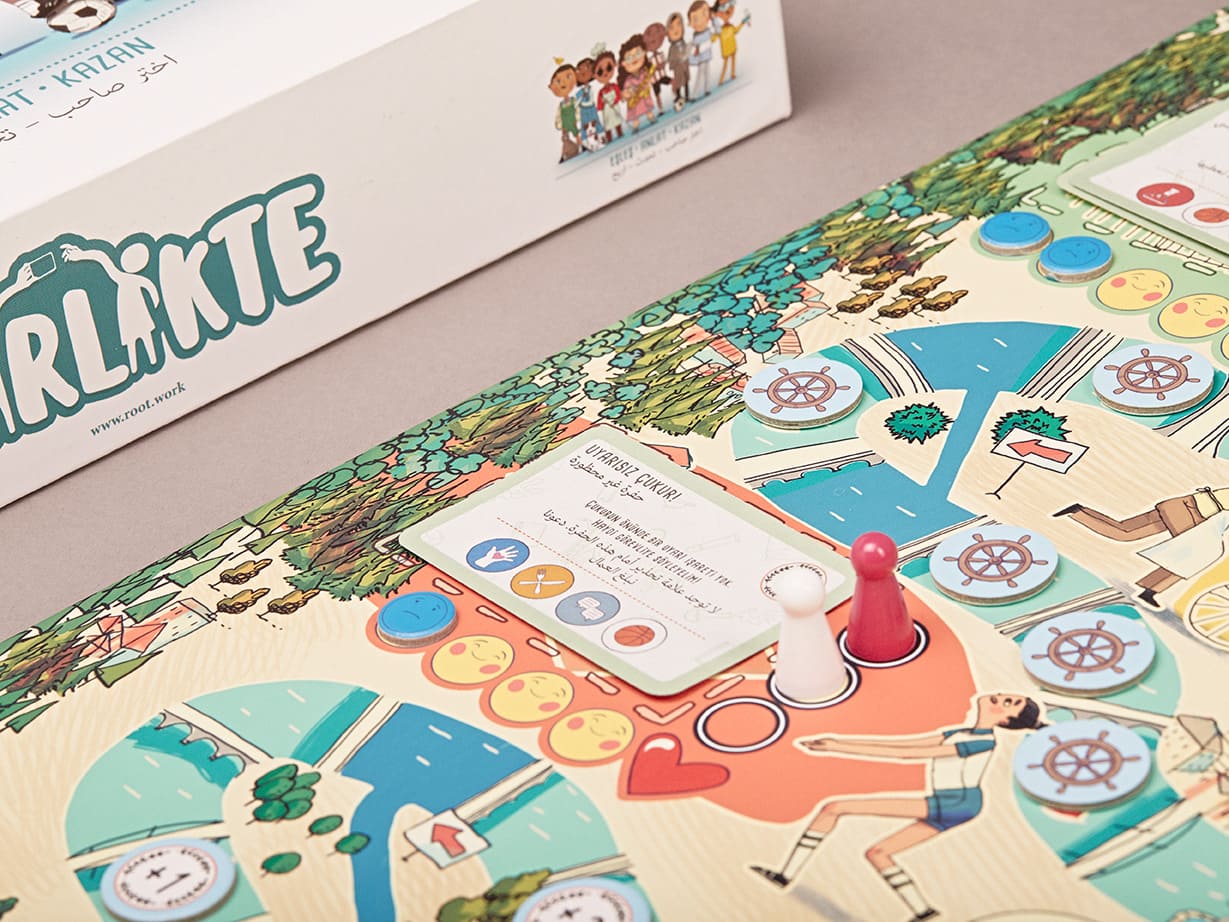 In a game that is played between two cultures, it is easy to fall into the mindset of “us against them” or  “you versus me”. To prevent this and to encourage cooperation, the team members of each party are interspersed among the members of the other party, and the teams’ representations on the board game are board game chips stripped of politically sensitive elements.Without a sense of “us versus them” them, in order to create the excitement of winning the game, it is framed as a cooperative game where the two teams need to win against the board’s character by collaborating.

Gameplay reinforcing a sense of safety and community through shared goals creates an engaging game structure in which a socially reinforced learning environment results in de-antagonization and creation of a shared sense of human struggles. In our game,  players can overcome these struggles through joint effort as well as learning facts that offer informational support to the children who would otherwise be unable to receive the social, physical, emotional, and information support easily elsewhere. 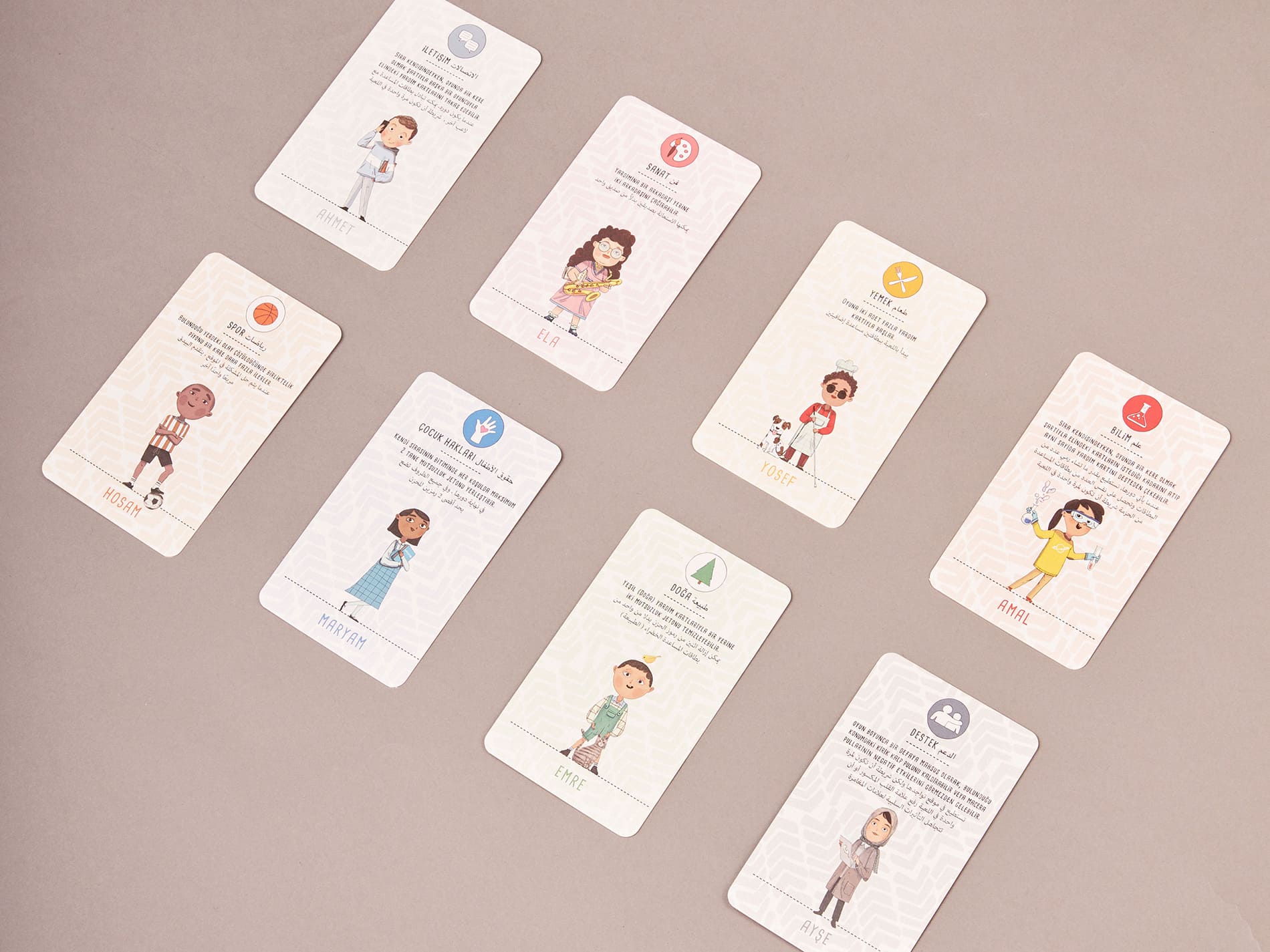 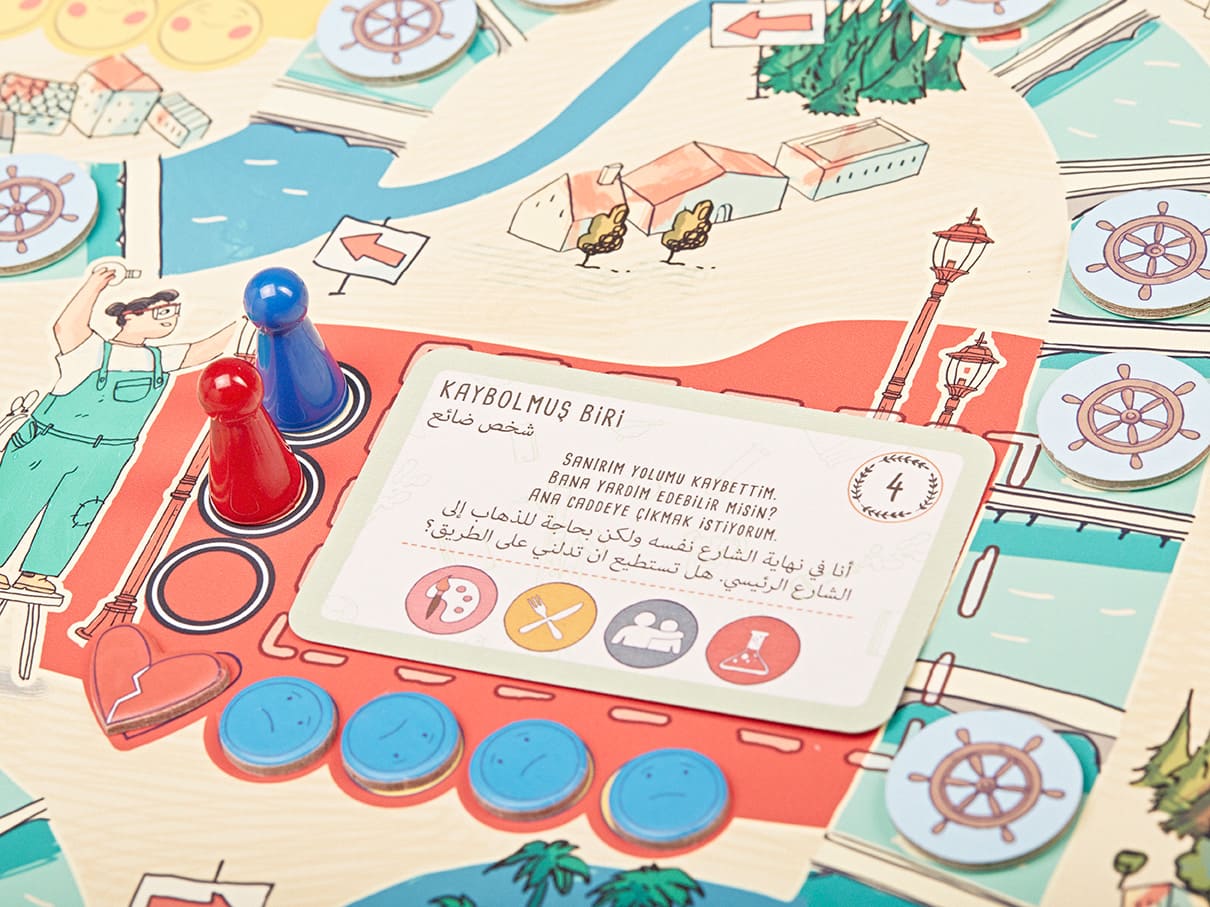 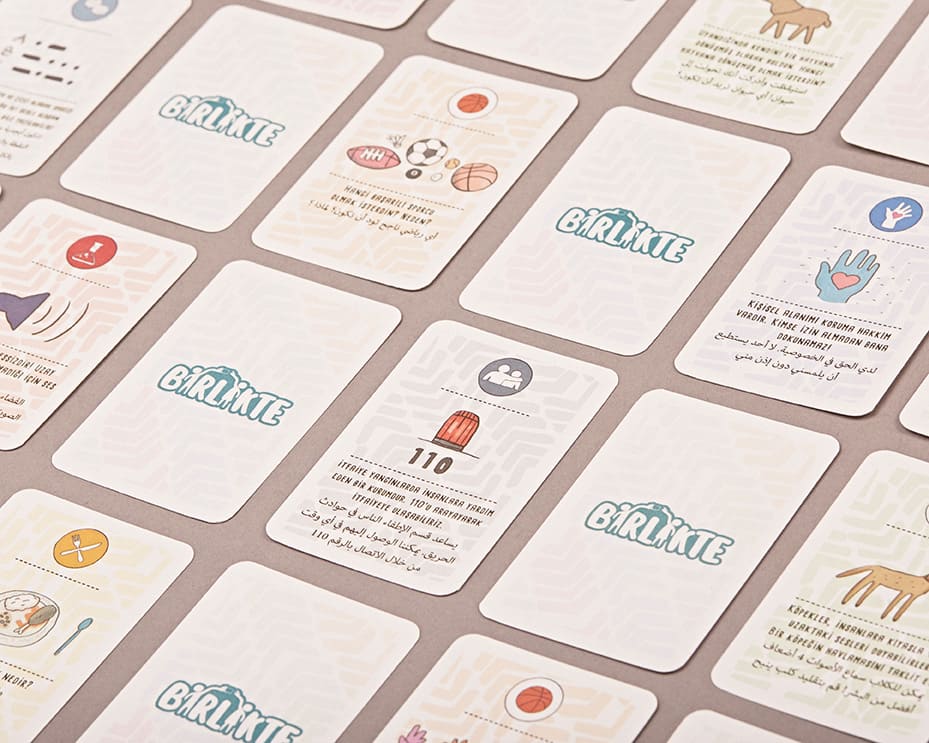 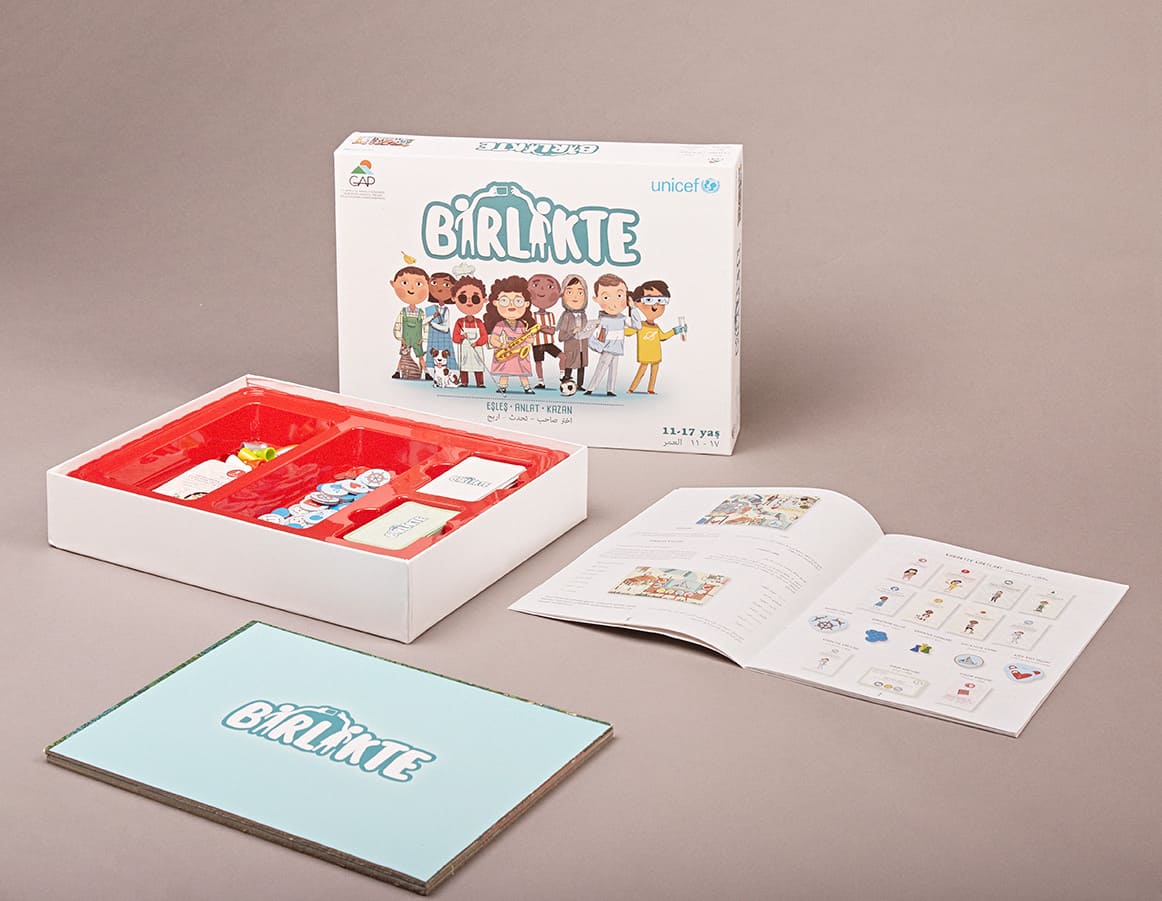